DMI’s experience with Aperture Card conversion and digitization and Aperture Card Scanning extends back to the late 1970’s. Even before PCs were announced, our subsidiary, microMEDIA, had a full complement of equipment to create aperture cards.  We used microfilm cameras for small and large drawings with provided professional film processing in our laboratories. We employed IBM punched card equipment to enter Hollerith data codes.

In 1986 we began Aperture Card Digitization. Our equipment digitizes the 35mm film images that are inserted into a card’s “aperture.”  In the same scanner pass, we’re able to read and translate the identifying information from the punches in the cards.  The punched data is then correlated with the image to provide an index.

Not all Aperture Cards have punched images.   Some identify their images with printed or handwritten information describing the item on the film.  We then perform manual data entry to coordinate the written information with the digitized image. 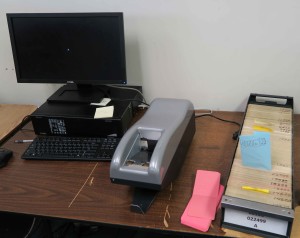 Typically, Aperture Cards contain large-format documents such as maps and engineering drawings. However, in some cases, manuals, parts lists or other letter-size information were recorded to film and inserted into cards. Instead of just one large image, the film might contain two, four or more separate images. Our technicians have developed methods to efficiently separate the multiple images and assure that they are correctly identified as components within the card.

We have multiple scanners available and can operate on a 24 X 7 basis for very fast turnaround.

Since the equipment we use is portable, conversion at a client’s location is available as an option for clients who may not wish to have their cards removed from their own site.

We look forward to discussing your specific Aperture Card scanning needs and providing a sample for your evaluation.