A seven-alarm fire engulfed a warehouse crammed with official documents near the waterfront in Williamsburg, Brooklyn, on Saturday morning, sending plumes of brown, acrid smoke into the air that were visible as far away as New Jersey.

By late afternoon, 10 hours after it began at 6:20 a.m., the fire was still burning, with flames consuming court files, hospital records and social service documents, and firefighters battling brutal cold and wind …….As the day unfolded, more than 200 firefighters converged on the CitiStorage building at 5 North 11th Street, near Kent Avenue, fighting the fire on land and from fire boats.

Chief Leonard declined to estimate when the fire might be extinguished, but said that fire crews were likely to be on the scene for weeks… Those that said they had records stored in the warehouse, which occupies nearly half a square block, included the state court system, the city Administration for Children’s Services, the city Health and Hospitals Corporation, and members of the Greater New York Hospital Association.

The child welfare agency said it had been in the process of removing its files from the building. “We are currently working to assess the number and type of files that may have been impacted by this massive fire,” the department said in a statement. A spokesman for the state court system said that it, too, had been in the process of transferring its records out of the building.

The city hospital agency said in a statement that it had electronic versions of patient records stored in the warehouse and added, “We do not anticipate this will affect our operations.”

Along the wind-whipped waterfront, slips of charred paper swirled through the air, and people grabbed handfuls of soggy documents strewn near the East River shoreline. One man picked up a scrap of paper documenting a urine sample. “Patient given specimen cup,” it read.

Fire at a Brooklyn Warehouse Puts Private Lives on Display 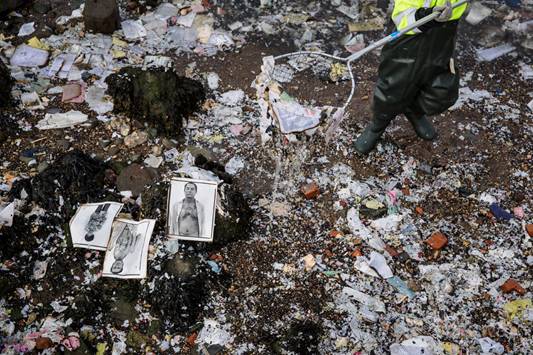 No lives were lost in the huge fire that gutted a storage building on the Brooklyn waterfront over the weekend. But the flames put plenty of lives on display as the crumpling warehouse belched up its contents: decades’ worth of charred medical records, court transcripts, lawyers’ letters, sonograms, bank checks and more.

“They’re like treasure maps, but with people’s personal information all over them,” Spencer Bergen, 24, said of the half-charred scraps that he said he had seen strewn around the Williamsburg neighborhood as far inland as Berry Street, several blocks from the warehouse.

New York City sent disaster recovery contractors, equipped with nets, shovels and protective boots, to try to collect the debris. But still, beachcombers sifted freely through the trove of documents, picking their way through remnants of the days when many records were on paper and the city government was one of the few takers for north Brooklyn’s waterfront land.

Compared with the large — and increasingly commonplace — online breaches of personal information at corporations like Home Depot, Target and Sony, the potential damage from stray scraps of paper may seem slight. Still, a glance at a rocky jetty just south of the warehouse revealed a scattering of records stamped “confidential,” a health insurance form with a person’s Social Security number, a urinalysis report complete with a patient’s name and copies of checks featuring bank account numbers.

“If you wanted to steal an identity, I’m sure if you looked at that piece of paper, you’d find a medical record,” said Sherry Hanson, 50, one of the many curious onlookers who clambered down the rocks at the edge of Bushwick Inlet Park to get a closer look at the heaps of paper on Sunday.

Reached on Sunday, the hospitals and city agencies sought to play down the possibility that reams of sensitive information had been thrown to the wind. At the same time, however, they said it was too early to know what types of documents had been lost.

The city learned firsthand the dangers of storing important documents in waterfront buildings when storm surges from Hurricane Sandy ravaged two Police Department storage facilities in Red Hook and Greenpoint in October 2012. The department is still struggling to determine the extent of the damage to the Greenpoint building, which contained thousands of pieces of evidence.